Welcome to the future of skincare! Get $50 off with code DROPLETTE50. 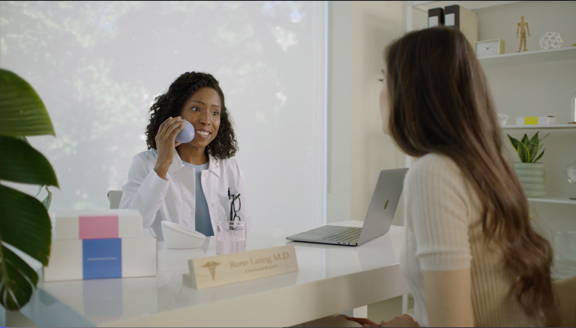 Clinical Trial Proof (with Before + After Pictures!)

Your skin’s efficacy as a barrier is a double-edged sword: the thing that makes the skin such a good gatekeeper is the same thing that also makes most topical skincare relatively ineffective. See how we know Droplette works better than topical skincare.

Your skin’s primary job is to play defense

Our skin is the largest organ in the body and its’ main job is to act like a barrier. Most of the time, that’s a really good thing; if our skin let things in easily, we wouldn’t even be able to take a shower without turning into a puddle and we would be a lot more susceptible to toxins or infections. In medicine and in beauty, skin’s efficacy as a barrier is double-edged sword though: the thing that makes the skin such a good gate keeper is the same thing that also makes most skin care relatively ineffective.

Most skincare actives in creams, serums and lotions that you put on your face are wiped or sweated away before it can ever absorb. Even worse, many of the larger molecules in popular formulations like collagen, hyaluronic acid or peptides have no way of getting into your skin. Only really small molecules can actually get through the skin without a needle. We measure the size of molecules (molecular weight) in a unit called Daltons (Da). Anything greater than 500 Daltons cannot be absorbed by the skin . To put this into context, collagen is actually 300 times larger than the biggest thing that can be absorbed by your skin. One of our dermatology advisors compared it to trying to push a beach ball through a mile of barbed wire.

Droplette can cross the barrier that topicals can’t

Droplette’s tech is unique: without using needles, we can get molecules that are up to 10000 times larger than what can be topically absorbed (< 500 Daltons) to skin.

How do we even measure this and prove that we’re better than topicals?

We’ve done hundreds of tests in our labs to prove that Droplette works in delivering these huge molecules into tissue where using a topical is completely ineffective. We’ve also had academic partners do independent tests with our device to make sure that these results can be replicated consistently. In fact, every time we iterate on the components inside the device, even if it’s just changing the LEDs or button, we make sure that Droplette can still pass our tried and true delivery test. To give you an idea of what that looks like, here’s an image from lab that compares topical delivery of a large (150 million daltons or mega-daltons) piece of DNA (plasmid) versus Droplette delivery into a section of tissue. We chose to use DNA because it tells us two thing: 1. It tells us the depth of delivery and 2. It tells us whether the DNA is damaged by the delivery process. This particular plasmid codes for a protein that fluoresces green. When delivered through Droplette, the DNA gets 20 cell layers deep and undergoes transcription and translation to create the protein that can be seen glowing green inside of the cells. This means that delivery through Droplette both gets deep into skin and doesn’t damage the DNA or the cells since they are able to perform a fairly complex biological function.

Our first human volunteer study was done to assess how much water we can deliver into skin to hydrate it. Hydration is measured using a machine called a corneometer that performs conductivity measurements to calculate the amount of water in skin. We showed that compared to topical delivery of water, using Droplette instead actually hydrated the skin up to 80% more and the effects could be seen over a 4-6 hour period, meaning that more water was getting in (80%) and it was staying in the skin longer (at least 3 more hours). It also showed us that the device was safe and did not cause any discomfort or damage to the skin. Next, we describe the design and execution of a larger consumer trial using Droplette - where we sent consumers home with the device and our Retinol formulation (containing Retinol, Collagen, Arbutin, and Vitamin C).

How we designed our consumer study

In the lab, it’s possible to slice open tissues or use fluorescent microscopy to show that molecules actually get through the skin. It’s a little bit harder in live human users: recruiting volunteers for skin biopsies isn’t a real possibility. Instead, we have to use before/after photos and metrics such as a wrinkle score.

Before/after photos are widely the industry standard, but when we dug deep into this, we found that lighting and camera angles can easily be manipulated to make after photos seem drastically better than the before photos. The same thing is true with measurement of wrinkle scores or skin sagging – these metrics are often scored visually by a technician and are not as quantitative as reading the output from a fluorescent cell counter in a lab. Our core team comes from a highly technical background and it was important to us that our results were interpretable and accurate even despite the limitations of these types of read out. These were the internal requirements that we generated for our first study and we designed them so that our consumers could gain the maximal trust in our results:

The study was designed as follows:

First and foremost, we found that across the board when subjects consistently used the device as instructed (since the device is connected, we were able to tabulate usage on the back end) they saw dramatic improvements in skin texture, appearance of fine lines and wrinkles, and skin firmness:

How we know the camera lighting is accurate:The birthmark on her forehead and her hair is the same color in both the before and the after shots.

How we know the camera lighting is accurate: The birthmark under her right eye is the same color in both the before and the after shots.

We’ve just picked a couple of before/after photos here to highlight the impact of using the Droplette/retinol formulation for 4 weeks, but across the board we saw statistically significant improvements in subjects who used the device as instructed.

How about the topical administration? Did it work?

We were most surprised by how our subject’s skin responded to topical administration of the formulation:

How we know the camera lighting is accurate: Her eyebrows and eyelashes are the same color in all three pictures.

Effects seen after Droplette treatment: It looked like the topical actually dried her skin out and made the lines on her forehead appear worse compared to even the baseline. After consulting with out advisory board on it and thinking about this in the context of our previous results with Droplette’s hydrating effects, we were able to conclude that some of the ingredients in this formulation (such as the retinol) can indeed be drying. However, using Droplette we deliver both more ingredient as well as more water – meaning that the skin is better hydrated and is able to adapt to ingredients such as retinol faster.

The study described here is one of the longer ones we’ve conducted to date with consumers (4 weeks of at-home usage).